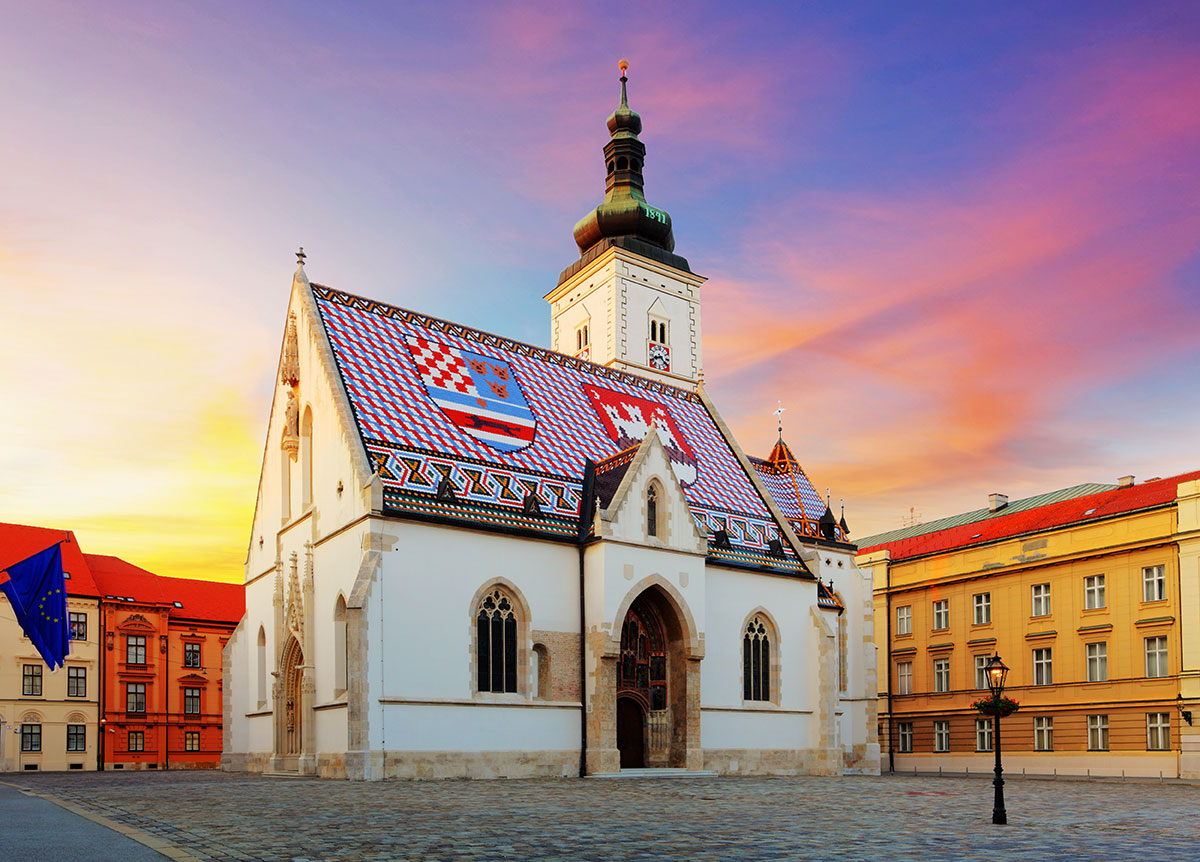 Welcome to Zagreb! You will be met and transferred to your hotel. Then the day is free to get settled in or begin exploring. Later, gather for a Welcome Dinner. (D)

A morning sightseeing tour includes views of the historic Upper Town, St. Mark’s Church, St. Catherine’s Church, the Cathedral, Parliament, and Government Palace. The rest of the day is at leisure to explore more of the city, browse through the shops, or take an or take an optional excursion to see the countryside. (B)

Travel to spectacular Plitvice Lakes National Park. Have your camera ready as you take a walking tour around several of the lower lakes. Enjoy the breathtaking scenery of this natural wonder of 16 terraced lakes surrounded by thickly wooded mountains and lush vegetation. The rest of the day is at leisure to explore more on your own. Later, gather for a dinner served at our hotel and overnight. (B, D)

After breakfast, head to Trogir, the center of artistic activities. Scholars from around the world gather here to study and paint. Continue traveling along the spectacular Adriatic coast, passing by old fishing villages and new resorts, to the city of Split. A city tour featuring the historic inner city, built around the Roman Emperor Diocletian’s Palace, a UNESCO World Cultural Heritage site. Finally, see the remnants of Split’s Roman heritage, its Renaissance and Gothic structures, Jupiter’s Temple, the Peristyle and the Cathedral. The reminder of the day is at leisure. (B)

Day at leisure or you can join optional tour to Hvar Island: We board the ferry in Split and set sail for Hvar. The town of Hvar has a unique cultural and historical heritage, plus a centuries-old tradition in tourism. A walking tour includes views of the 17th century theatre, the 13th century Arsenal, and the central town square with the Cathedral. You will visit the Franciscan Monastery, famous for its collection of old art masters, including “lngoli ‘s Last Supper”. Afterward, we travel to Stari Grad for some wine tasting. A ferry returns us to Split. (B)

Finally, travel to Dubrovnik, with its picturesque setting on the stunning Adriatic coast. A walking tour shows you the highlights of Old Dubrovnik. See the Rector’s Palace, Bell Tower Clock, Orlando’s Column and Sponza Palace. Then it’s on to see the Dominican Monastery and Franciscan Monastery with its Pharmacy, one of the oldest in the world. The rest of the day is at leisure to explore on your own, shop, stroll along the water’s edge, or simply relax and delight in your superbly scenic surroundings. (B, L)

At leisure or you can join optional tour to Montenegro
Travel to the Republic of Montenegro. Head to the mouth of the beautiful Bay of Kotor, the longest and deepest fjord in Southern Europe. Enjoy a boat ride to Our Lady of the Rocks, one of two islets off the coast of Perast. The Roman Catholic Church is the largest building on the islet, with a museum attached to it. Upon return to the coast, we will stop in Perast, an old charming coastal town. Visit city of Kotor before returning to Dubrovnik. Later, gather for a Farewell Dinner. (B, D)

Today we head to Montenegro. First, drive through the Bay of Kotor, the deepest fjord in Southern Europe. Then, drive up a spectacularly steep road to Cetinje, the historical capital of the country, set at the foot of Mount Lovcen. Stop and visit the King Nikola’s Museum, presenting the history of Montenegro. We continue to Podgorica, the capital of Montenegro and finish the day at Kolasin where the whole area is surrounded by the thick pine forest of the Bjelasica Mountain and is a popular skiing and air spa resort. Dinner and overnight in Kolasin. (B, D)

After breakfast, depart Kolas in and visit Moraca Monastery, the largest medieval Orthodox monument in Montenegro built in 1252. Then cross to Albania and travel to the town of Shkodra, a cultural center and one of Albania’s oldest cities. Drive by the ruins of Rozafa Castle, set on a hill high above the city. Continue to Tirana for dinner and overnight. (B)

A morning sightseeing tour shows you Skanderbeg Square; the Mosque of Et’hem Bey; the Clock Tower; the statue of G.K. Skanderbeg, Albania’s national hero; the Palace of Culture, built with Soviet assistance; and the National History Museum, with a mosaic on its facade portraying Albanian history. Your afternoon is free to discover the city at your own pace, shop, or join an optional tour Visit of Archaeological museum in Dures and Skanderberg distillery with cognac and wine tasting. We gather for a farewell dinner. (B, D)

Following breakfast, you will be transferred and dropped off at Tirana airport for your flight home.(B) 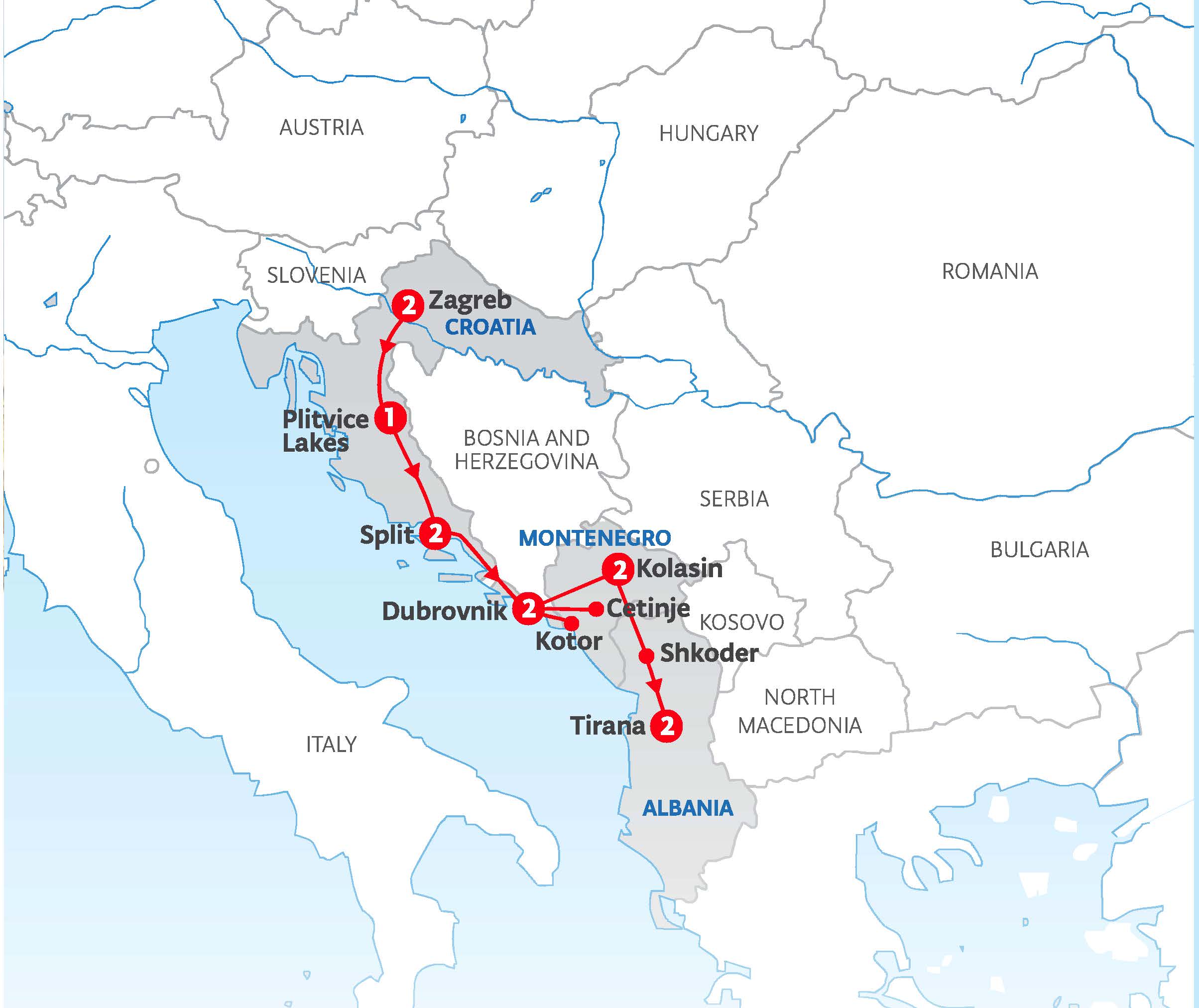