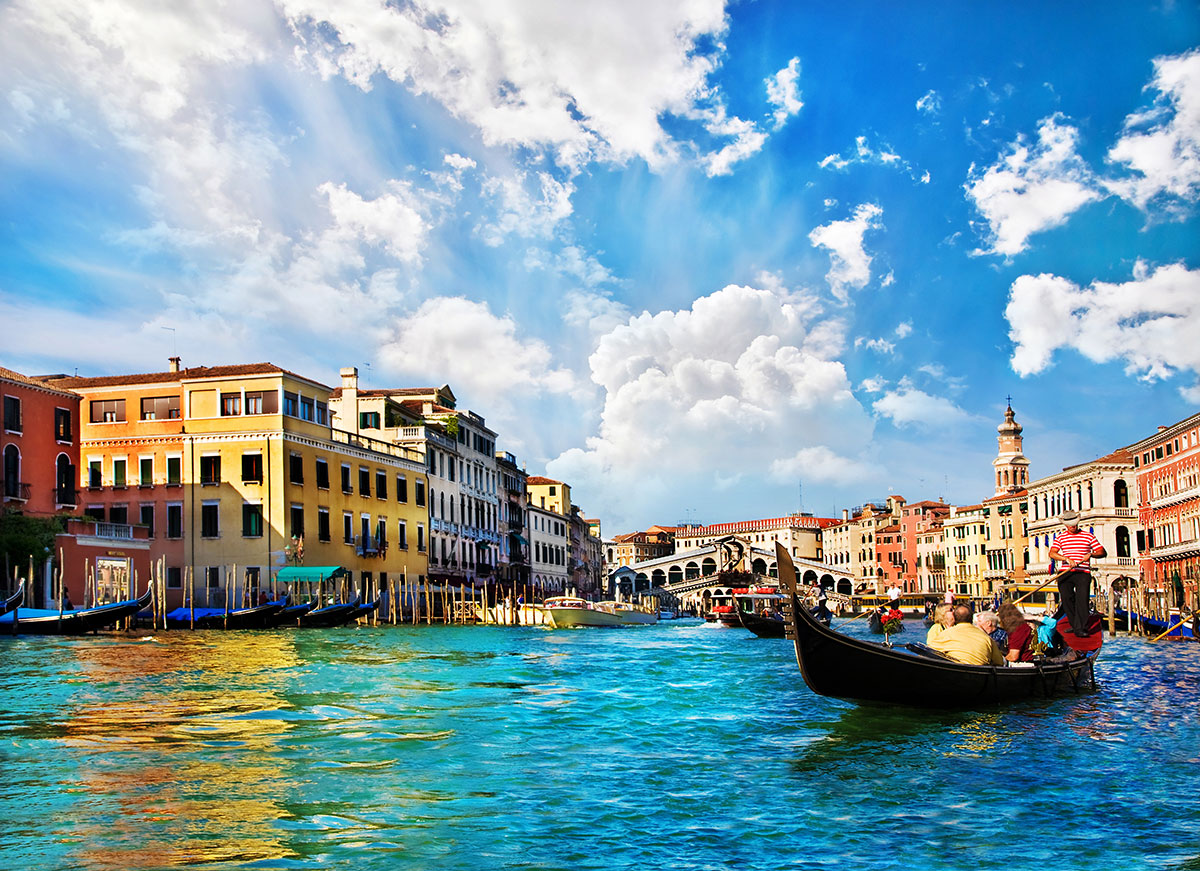 Upon arrival to Venice airport, you will be transferred to your hotel. Dinner at hotel and overnight. (D)

After breakfast, we begin to explore Venice by a boat ride to Murano Island, famous for its artistic glassware. In a working glass factory, we observe master craftsmen demonstrate the art of traditional Venetian glassblowing. After we depat for St. Mark’s Square, for a walking tour with visits of St. Mark’s Basilica and the Doge’s Palace. Also we will see the Bell Tower and the Bridge of Sighs. The balance of the day is at leisure to enjoy even more of Venice. Later, we gather for a dinner in a local restaurant. (B,D)

We embark the catamaran in the afternoon and sail directly to Poreč. After check in at the hotel, explore the city with rich dining experiences. Overnight in Poreč (B)

After breakfast, we make a short tour of Poreč, city of stone streets, ruins of ancient temples, forums and other beautiful buildings preserved from ancient times testify to the number of conquerors. The Euphrasian Basilica from the 6th century is the most valuable historical and cultural monument in Istria, listed as a UNESCO World Heritage Site. We drive then to Pula for an orientation tour of this strategic port city. We also visit the preserved Amphitheater, the sixth largest in the world. Then we continue to Rovinj, the most romantic town in Croatia, a charmingly picturesque old town. One of the most famous attractions is the St. Euphemia Cathedral, the largest baroque building in Istria. Built according to plans by Venetian architect Giovanni Dizzi, the bell tower on the church is a copy of the one at St Mark’s Basilica in Venice. Free time in Rovinj. Return and overnight in Poreč. (B)

After breakfast, we depart to Slovenia and visit the unique and beautiful Postojna Cave, one of the largest in Europe. We will explore this wondrous subterranean world by miniature electric train. We continue to Ljubljana. City tour of Ljubljana, the capital of Slovenia and a home to one of the oldest Philharmonics in the world. Explore the baroque town buildings and stroll beside majestic Ljubljanica River. Free time on your own and continuation to Zagreb. Dinner and overnight in Zagreb.(B,D)

Morning city tour of Zagreb, including the fortified Upper Town, historical city center, St. Mark’s Church with its multicolored roof, the Cathedral, the Croatian National Theater and the University The rest of your day at leisure. Overnight in Zagreb.(B)

We continue our journey south by motorcoach to visit Plitvice Lakes National Park, a UNESCO World Heritage site. In Plitvice, we walk around several of the lower lakes. The Park is a natural wonder with 16 terraced lakes surrounded by wooded mountains and lush vegetation. After our visit, continue to Split where embarkation starts at 2PM. Welcome Reception followed by a dinner. Overnight onboard in Split. (B,WR,D)

In the morning join a guided tour of Split, visit the seafront promenade and Roman Emperor Diocletian’s Palace. The historical center of the city is listed as a UNESCO World Heritage site. Set sail to the old Dalmatian town Trogir. Trogir is sometimes referred to as “miniature Venice” or a “mini Dubrovnik” because of its ancient walls, or a floating museum town – as it has a masterful architecture including some stunning Venetian palaces. After disembark in Trogir we will take the bus to visit Krka National Park. You will discover the pristine nature and waterfalls of the Krka National Park, an area extremely rich with flora and fauna. Overnight in Trogir. (B,L)

Morning guided tour of Trogir with a local tour guide. Enjoy sailing towards Stari Grad on the Island of Hvar, swimming stop and lunch on board. Stari Grad is one of the oldest towns in Europe with many friendly and affordable konobas and restaurants in the backstreets of the old town. The Stari Grad Plain and the old town centre of Stari Grad have been listed as UNESCO World Heritage Sites since 2008. Your evening is free to explore Stari Grad on your own. (B,L)

Leaving Stari Grad in the morning towards city of Hvar. A sightseeing tour of Hvar town shows you the first public theatre in Europe and many more historical sites. Afterwards continue to Vis. The town of Vis is on the northern side of the island and was developed near the remains of ancient Issa, the first urban centre in Croatia, formed by the Greeks in 4th century B.C. Visit the remains of the Roman Baths, Church or Our Lady and City Museum or take a walk enjoying the view of the beautiful Villae Rusticae situated along the coast. Your evening is free in Vis. (B,L)

Leaving Vis, we will have an early morning cruise towards Biševo Island to visit the Blue Cave (weather permitted), a magnificent natural phenomenon on the Biševo Island just in front of the town of Komiža. e. Afterwards cruise towards the Korčula the island’s main settlement and is known as the birthplace of Marco Polo, one of the world’s most famous explorers of all times. Stop for lunch in one of the secluded bays en route. Afternoon arrival in Korčula followed by a guided walking tour of one of the best-preserved medieval cities in the Mediterranean. Korčula has an abundant choice of restaurants to enjoy your gourmet experience and there are numerous bars and clubs for those looking for evening entertainment. Overnight in Korčula. (B,L)

In the morning head further south to the Island of Mljet. Join the Cruise Manager for a stroll to the famous salt lakes in the Mljet National Park. Alternatively, you can rent bicycles, scooters or kayaks to explore the National Park or island on your own. Lunch on board and departure for a small village called Slano on the mainland, a peaceful fishermen’s village and the starting point to Ston, another once fortified small village famous for its oysters situated on Pelješac peninsula. Pelješac peninsula is known as one of the best wine-producing regions in Croatia. After exploring the town, we leave to a small nearby village to enjoy the authentic local oyster tasting. Tonight, enjoy Captain’s dinner and overnight in Slano. (B,L,CD)

Early morning cruise to Elaphiti islands with swimming stop on one of the secluded bays to spend the morning. Before lunch sail to Dubrovnik, before we moor at port we cruise alongside the old city walls, while lunch is served. After docking, join a guided tour with panoramic ride and transfer included. After the panoramic view, we will arrive at the historical centre of Dubrovnik, Stradun, both a street and a square, the most famous place inside the town walls, the famous city enlisted as UNESCO’s World Heritage site, where your guide will show you the most interesting sights of Dubrovnik and visit the Franciscan Monastery with its Pharmacy. After city tour, you will be on own to explore the city, visit City Walls, the Franciscan Monastery with Europe’s second oldest pharmacy, the Rector’s Palace, and the Cathedral, take a boat ride to Lokrum island or take the cable car to the top of the Mount Srđ. Overnight in Dubrovnik. (B)

After breakfast it’s time to disembark. You will be transferred to Dubrovnik airport or your Dubrovnik hotel. (B) 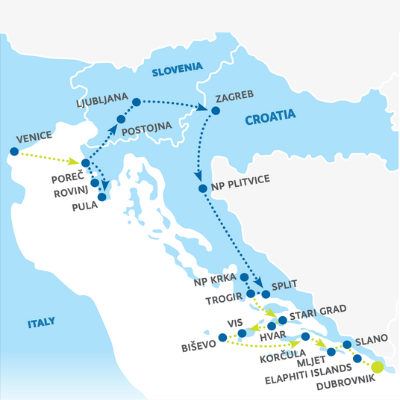